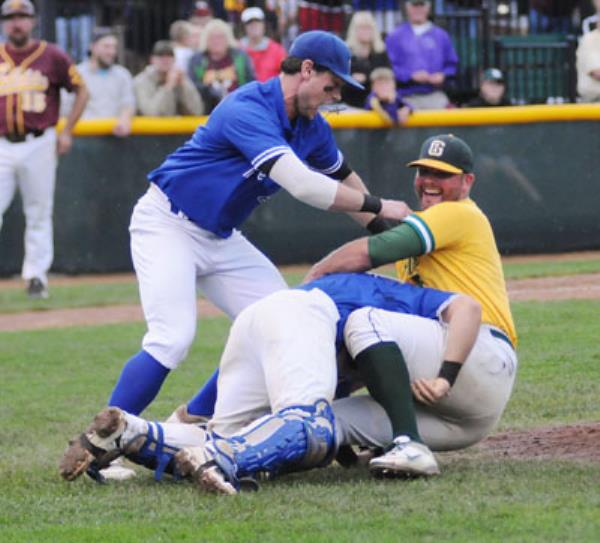 The majority of the snow has finally melted and teams across the state are getting set to begin the 2019 campaign. Well, we'd better take a look at who's returning to the top 10 rankings.

Once again we've assembled our experts to help give insight to the top performing teams throughout the season and they've delivered their preseason rankings.

After Plato surged to the 2018 state title behind an 8-5 victory over Sobieski in the championship, it's no surprise that the Bluejays garnered all of the first-place votes and will begin the 2019 season ranked No. 1 in Class C. Sobieski, meanwhile, has moved up to Class B, which means a big shakeup in Class C.

Kimball and Young America start the year ranked No. 2 after both reached reached the final four. New Market, which lost, perhaps twice, to Young America in the quarterfinals begins the season ranked No. 3.

The Sartell Muskies, who also endured a marathon game against Red Wing to reach quarterfinals, will start the season ranked No. 4. Just behind the Muskies is Buckman, which bowed out in the quarterfinals to Kimball. The Billygoats are one of the teams expected to benefit from Sobieski's move to Class B.

Check out the rest of the top 10 below and see how our panel chose their top 10.

1. Plato - The defending champions have to start the season on top, had to win a couple 1-0 games at state, before the bats came alive in the semifinals and finals.

2. Kimball - Was two wins away from back to back titles, but ran into the Bluejays in the semifinals.

3. Young America - Might have snuck up on a lot people last year that don’t follow the Crow River. Tons of young talent, would be surprised to not see them in the top 10 all year.

4. New Market- Probably the most entertaining game of last year’s state tournament was Young America outlasting the Fish in extra innings in the final 8.  Always a great mix of veterans and youth for New Market.

5. Buckman - With Sobieski moving to Class B this will be one of the many talented teams in the Victory League, trying to become the team to beat in their region.

6. Faribault - The Lakers had to fight through injuries all season, but got healthy by playoff time, and got to Labor Day weekend, before losing a 1-0 thriller to Plato.

7. Sartell - The Northern Fish (New Market the Southern Fish). Always a talented squad that got to the final 8 last year

9. St. Patrick - Another team that has a great mix of youth and veterans; Will be a team to keep an eye on, which plays in a beautiful ballpark, that just got some upgrades.

10. Ortonville - This team was great to have in New Prague for the opening night of the state tournament, and they took care of their team host, with a nice shirt and cap.

1. Plato Bluejays – Coming off their fourth championship since the '90s, and still just as tough, even though the board’s point system has required them to release their CF’er and 3B from last year.  I expect them to fill those positions just fine with their homegrown talent.

2. Young America Cardinals – With Sobieski moving to Class B, this second spot opens up for the Cardinals. The Cards fought hard in the state semis against the Skis. Once all their college guys return I look for them to build on the success of 2018!

3. Kimball Express – Top four finish also from last year to follow up the 2017 championship. This group has tasted success and I expect them to be around Labor Day weekend.

4. Sartell Muskies – Was on the top of my list most of last season, was knocked out by Sobieski in last year’s tourney. A lot of veteran leadership on this team.

5. New Market Muskies – Strong team in the DRS, came out on the wrong end of a marathon game at the tourney last year in the quarterfinals. I look for them to be in the mix at the top of the DRS.

6. Buckman Billygoats – With Sobieski moved to B with the Billygoats be ready to be the team to beat in the Victory League?

7. Hutchinson Huskies – The first team in the Minnesota Baseball Association State Tournament to pitch a perfect game. I expect the Huskies to be on top of the North Star League.

8. New London Spicer Twins – Had a great 2018 tourney, tough team that can hit! Made it through their league schedule unscathed last year.

9. Sleepy Eye Indians – Had a great run at the tourney in ’18 looking forward to following their ’19 season.

10. New Prague Orioles – Another good run for a DRS team last season.  They have had two good tournies in a row. Looking forward to see how that translates into 2019

I’m looking forward to another fun year.  But first, a plea to the teams. Please update your scores on the Minnesota Baseball Association site or on your league websites if that’s an option. It helps a great deal in trying to find updates, especially when you’re not from the area and trying to do a state-wide poll. Thank you.

1. Plato Bluejays – Plato won the state title impressively last September and holds the top spot in any preseason poll. The Bluejays are talented, led by state tournament MVP Chris Odegaard, Matt Odegaard, Tyler Lang and Nolan Lepel among others, and should be a top-10 team all season.

2. New  Market Muskies – New Market is another talented team that made it to the final four last season. The Muskies also have been a regular in the top 10 in recent years and should be again.

3. Sartell Muskies – Speaking of regulars in the top 10, the Muskies are a veteran squad that knows how to win. They will be the top team in the Sauk Valley League and have been a top-10 mainstay in these rankings.

4. Kimball Express – Do you sense a theme here? Here’s another veteran, skilled team that’s always in the mix at the end of the season. Kimball will be one of the top teams in the Central Valley League.

5. Hutchinson Huskies – Hutchinson made another long state run last year and should be another team to watch in 2019.

6. Young America Cardinals – The Cardinals were another team that made a run at state and have put themselves on the radar screen for 2019.

7. Faribault Lakers – In three state tournament games last year, Faribault gave up one run, a 1-0 loss to Plato. The Lakers are definitely a team to watch.

8. Buckman Billygoats – There has been a shakeup in the Victory League this year with the Sobieski Skis moving up to Class B. Are the Goats the best C team? They were a state quarterfinalist last year and have a good, young talent base. Anyone who comes out of the 20-team Victory League into the state tournament is someone to watch, just because of all the drafted pitchers.

9. New  London-Spicer Twins – This is another team to watch after the Twins won a pair of state tournament games before losing to Sobieski, 5-2.

10. Raymond Rockets – Raymond remains one of the better teams in the state and has been a top-10 regular since these rankings were instituted.

Honorable mentions: I think I could come up with a second top 10 capable of beating anybody in this top 10. Teams with good chances of cracking the top 10: Richmond, Elrosa and Lake Henry from the Stearns County League, Luxemburg, Watkins and the Cold Spring Rockies in the Central Valley League, Fort Ripley, Avon and Upsala from the Victory League, along with Maple Lake, New Prague, Jordan, Red Wing and the Milroy Yankees.