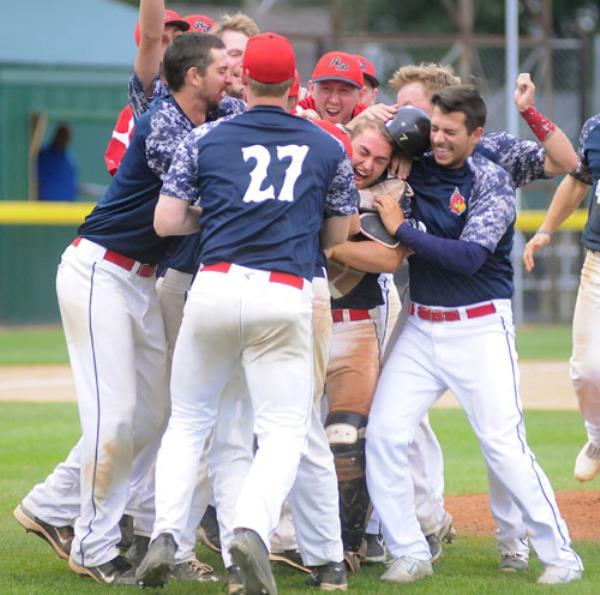 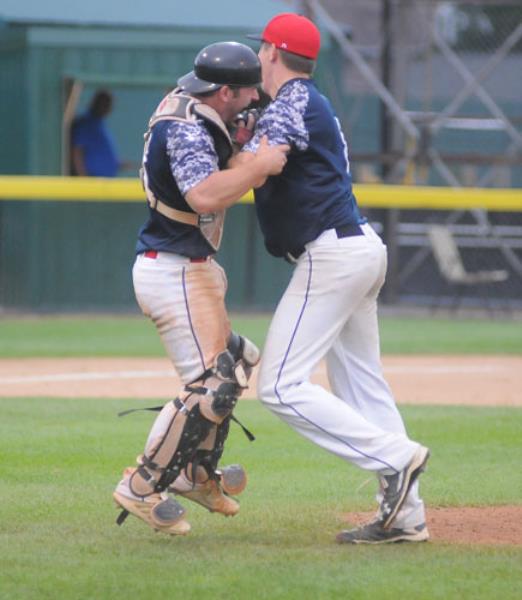 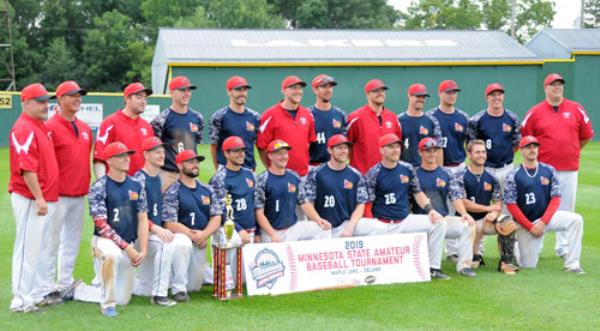 Twice as nice: Chanhassen repeats as Class B champion with pair of Labor Day wins
Posted on Sep 03, 2019

Pitching kept Chanhassen alive in the Class B state tournament and hitting is what won a second consecutive state title Monday in Maple Lake for the Red Birds.

It seemed like only a matter of time before the lineup got going and it did in the final three games for Chanhassen as it defeated Dundas twice to claim the 2019 state title. It marked the second consecutive year where the Red Birds had to win twice to claim the title and they got started right away in the first game en route to an 8-1 victory and continued hitting in the second game for a 9-2 victory to clinch the title.

Two years ago Chanhassen sat in the winner’s bracket but Miesville came through the loser’s bracket to defeat the Red Birds twice to claim the 2017 state title, the second in a row for the Mudhens. This season Chanhassen rattled off five consecutive victories and played a total of 59 innings Labor Day weekend.

The bats emerged Sunday night in a 9-0 win over Blaine to give Chanhassen a shot at defending its title. The Red Birds took advantage of nine walks in that game but also had 10 hits. Until that point, Chanhassen had not scored more than two runs in its five previous state tournament games.

The Red Birds got by thanks in part to the arms of Miles Nablo, Logan Spitzack, Dominic Reed, Chris Choles, Shawn Riesgraf and John Straka. Straka threw two complete game shutouts to start the tournament but faltered Friday in a 6-1 loss to Blaine that made the path to repeating as champions a little more difficult. Chanhassen moved to the loser’s bracket last season after a semifinal loss to Miesville and needed just one win to get to the championship game. The Red Birds still needed to defeat the Mudhens twice but this year, after losing to the Fusion, they needed to win three additional games, with one coming in 14 innings against Moorhead Saturday night in a 2-1 victory.

“We knew the bats were going to come around eventually and they finally did,” Spitzack said. “There’s something about putting us in a corner and having that adrenaline, I think, that helps a little bit.”

Nablo delivered a big start for Chanhassen in the first game by throwing a complete-game seven-hitter where allowed just one run. Even with a deep pitching rotation, the start gave some additional rest for a taxed staff.

Spitzack relieved Riesgraf in the fourth inning of the second game against Dundas and threw six shutout innings, which came after a three-hit shutout Saturday in a 2-0 win over Chaska.

There were a lot of arms to choose from to select as the Class B state tournament MVP but the honor went to Straka, who finished 2-1 in the tournament after throwing 23 ⅔ innings. He allowed 15 hits, six runs, five earned and struck out 14 for a 1.90 ERA.

“We had 40 home runs on the year and we only had one all tournament so we really wanted to play with our speed, get on base and run, run, run,” manager Mike Ralston said. "That’s what we tried to do, play with our speed. We knew six or seven guys can steal bases so we said, ‘Let’s do it. Let’s make them throw the baseball.’”

Chanhassen remained opportunistic to pull ahead 2-1 in the bottom of the second inning of the second game. Garrett Fischer reached on an infield single and scored on a throwing error from second base that allowed Derek Smith to reach. Smith scored one batter later on Aaron Kloeppner’s single.

Dudas grabbed a 1-0 lead in the top of the first when Haydn Lanoue singled to start the game. Carson Jones followed with an infield single and a ground out moved both runners into scoring position. Jon Bishop popped out to shallow right field and Lanoue scored.

Bishop knotted the game 2-2 in the top of the third inning with a solo home run to right field.

John McCaustlin started for the Dukes and lasted 3 ⅔ innings and allowed seven runs — all unearned — on eight hits. Charlie Ruud threw the final 4 ⅓ innings and gave up two runs on five hits. He struck out two for Dundas, which finished second for the eighth time in club history.

Chanhassen took advantage of Dundas miscues to jump out to an early advantage in the Class B championship game Monday in Maple Lake to force a second and deciding game. The Red Birds scored two of the their first three runs off errors by the Dukes and raced out to a 3-0 lead by the fifth inning.

Chanhassen added a run in the sixth after Fischer singled, stole second and scored on a double fromRiesgraf to make it 4-0.

Mick Dudero started for the Dukes and went four innings. He allowed two runs, one earned on six hits. Derek Albers came on in relief to go 2 1/3 innings. He gave up five runs, four earned, on six hits, struck out one and walked none. Nic Zabel threw the final 2 ⅔ innings and allowed an unearned run on three hits.

Nablo, who threw three innings of relief Saturday against Moorhead to earn the win in a 2-1 14-inning game, started for Chanhassen. Nablo cruised through five innings before running into a jam in the sixth.

Haydn Lanoue reached on an error with one out and Carson Jones followed with a double to give Dundas runners in scoring position but Nate Van Roekel ground out to shortstop and Jon Bishop flew out to left center field.

The Red Birds kept hitting and in the seventh added four runs. Johnson and Arnold singled to start the inning with Arnold reaching on a bunt. Chanhassen ran a double steal where Johnson scored and Nick Smith drove in his third run of the game with a single. Anderson tripled to score a run and later scored on an error.

Johnson went 5-for-10 for the day, Nick Smith went 3-for-5 with three RBIs in the first game while Riesgraf and Anderson each had two hits.