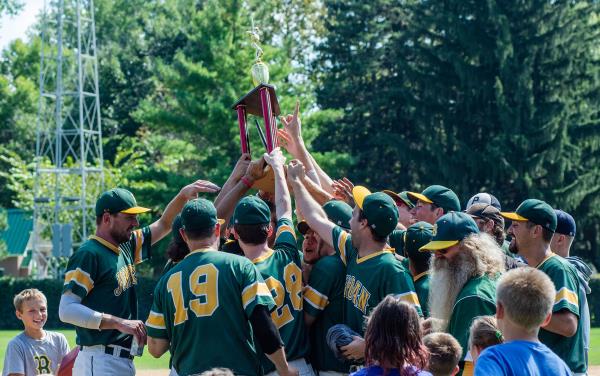 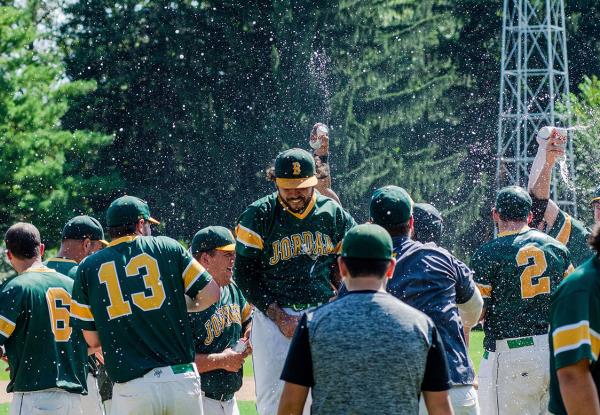 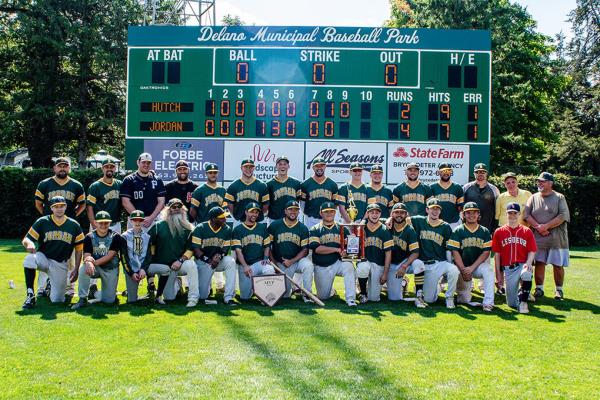 Turns out, if a close-knit group can win some close games, it can deliver the biggest prize of them all.

Chemistry and solid play helped the Jordan Brewers finish their 2019 Class C State Tournament run with a championship, capped by a 4-2 win over the Hutchinson Huskies Monday at Delano Municipal Baseball Park. The Brewers never blew any opponents away over their last four state tournament games, but they made the right plays at the right times to deliver their town its fourth amateur baseball title.

“It’s a whole community,” tournament MVP Joe Lucas said. “We’re 95, 98 percent of us are from Jordan. It means the world to us. We’re just a small little baseball community. We have a lot of pride in baseball. To bring this back home is unbelievable.”

Jordan didn’t play perfect baseball — a couple miscues in the semifinals almost allowed Buckman to creep back the night before — but never let any situation get too out of hand. The Huskies scored a run by the time the fourth batter of the game came to the plate, but despite threatening again in the fifth and eighth innings, Jordan held Hutchinson to just two total runs.

“We play a lot of games during the summer and I think we prepare ourselves for this type of tournament,” left fielder/manager Scott Hollingsworth said. “I think all that preparation during the summer was key to that. We don’t get flustered a lot, we’ve been with each other for a long time. We pick each other up when something happens.”

The win also meant a little extra to one member of the Brewers, who got a boost from his teammates. Jacob Allen went up to receive the championship trophy on behalf of the Brewers — his mother, Missy, died suddenly last November.

“To have that happen — and he asked me before the tournament if we could win this for his mom,” Hollingsworth said. “Now I’m going to get emotional, but it was for him and his mom.”

And for as closely tied as all the Brewers are, they got a big performance from a draftee to win the title game. Garett Anderson of Blue Earth got the start on the mound for Jordan against Hutchinson and pitched a complete game, allowing two earned runs on nine hits and a walk with five strikeouts. It was the first time he pitched this state tournament.

“It’s not easy. I’ve been drafted a couple times, it’s not easy going into a dugout where you’re not familiar with people,” Lucas said. “But we have great people. Awesome, awesome people. Everyone around, we have awesome families.”

Jordan was able to get the runs it needed in the fifth inning. The Brewers opened the bottom of the frame with three straight singles off 51-year-old Kyle Messner of Hutchinson. Coincidentally, Messner started for Jordan in the 1988 Class B championship game against Dundas. The three hits ended Messner’s outing, and the Brewers followed up with a single, walk and fielder’s choice against Jeremiah Van De Steeg to score three runs and go up 4-1.

Hutchinson got an infield hit in the eighth from Matthew Piechowski, who stole second and took third on a wild pitch before Marcus Hahn drove him in to make it a 4-2 game.

But Anderson worked around a one-out single in the ninth, getting Noah Corrow to pop out to catcher Kyle Hvidsten to end the game.

“To be honest with you, I know exactly how he’s feeling, because when I won in 2010 with Shakopee, I was a draftee and pitched the same performance,” Hollingsworth said. “I knew he could gut it out for us. He wanted to be out there, he wanted the ball, and that meant a lot to us.”

Adam Kalal doubled to open the first inning for Hutchinson and scored on Jake Wendland’s double to put the Huskies up 1-0.

Lucas reached in the fourth on a fielder’s choice and advanced to third on a pair of passed balls before scoring on Nate Beckman’s RBI single to tie it 1-1.

Hutchinson put two on with one out in the top of the fifth, but Anderson got ground ball outs to end the threat.

Outside of their opener against Bird Island, a 10-4 victory, the Brewers didn’t win any state tournament game by more than two runs. They needed 12 innings for a 1-0 win over Fergus Falls in the round of 16, then beat Bemidji 4-2 in the quarterfinals and Buckman 4-3 in the semis.

There were plenty of contributors for Jordan, which saw Steve Beckman, Nate Beckman and Adam Kalal named to the all-tournament team. And Lucas won MVP honors for going 5 of 21 with three runs, a double and six stolen bases as a hitter, while finishing 2-0 with a save and three hits allowed as a pitcher.

“It’s a team thing. It’s an absolute team thing,” Lucas said. “I wouldn’t be in the situations I was to get it [without my team].”

“It means more I think to the town,” Hollingsworth said. “There’s a lot of stuff that happened to the town over the season, and I think it meant a lot more to them. Granted, it meant well for us, but it meant a lot to a lot of people in this town.”